The objectives of the ASIA-ASEAN Data Strategy Research Consortium are to conduct research into the technology and policies that will play an important role in the strategic evolution of generation, analysis, application, sharing and distribution of data (open data and big data) in the era of Big Data, and take a leadership role in the Asia-ASEAN regions, focusing on education in these areas.

In recent years, the concept of various kinds of data being transmitted from the standalone environment to networks has rapidly become a reality in societies in certain areas, including medicine, disaster prevention and energy. Therefore, a model-based design has been promoted to realize social optimum through the analysis of this data. In line with this, our research system is built on two layers.

First, as a foundation, we work on the establishment of a research community to gather human resources including those from political and business circles both in Japan and overseas, that nod in the direction of research. We see this community as an effective promotional engine to accelerate research.
One of the design variables that attracts attention in the era of Big Data is “borders.” For example, recently, data has become able to cross the borders of cities, regions, and countries far more easily at a lower cost in terms of technology. With this as a background, this consortium promotes research focusing on the Asia-ASEAN regions, through the utilizing of Keio University’s existing regional networks of leaders in the areas of industry, academia and government. The networks include the SOI (School on the Internet) Asia Research Project, which has a long history dating back to the dawn of the Internet age, among Asia’s leading 28 universities, and the Project for Establishing University Networks for Internationalization (Re-Inventing Japan Project/Support for the Formation of Collaborative Programs with ASEAN Universities).

Second, we conduct research in system design, educational practices, and personnel exchange as well as technological development sharing in the community. When system design doesn’t go well, data are not used resulting in no innovation. It is also important to design with due consideration given to technology selection and the possible violation of the rights of data senders.
With regard to education in this high information society, it is essential to foster people with the skills and mindset to analyze factors based on data through the global platform of Big Data, and design and practice a correct solution approach, based on the analysis outcome. Likewise, we also cover the area of environment creation to enable those with advanced expertise to find opportunities in industrial circles.

In terms of specific areas of research, this consortium will promote research in collaboration with existing laboratories and projects (*) in Keio University.

* Based on the partnerships with 28 universities in 14 countries for nearly 20 years, mainly through the SOI Asia Project, Keio University has promoted personnel exchanges between students, faculties and Japanese companies that lead in the Big Data era. This is about to be established after two years of validation. 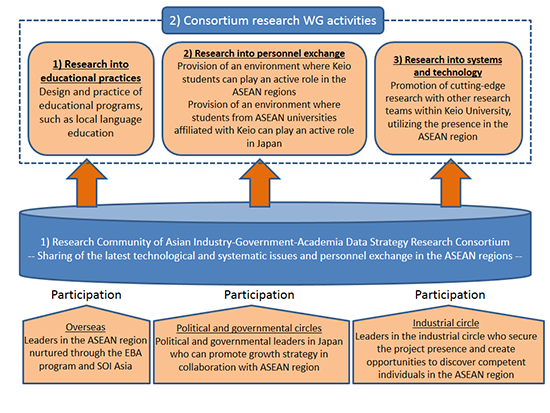